This is a detailed step-by-step guide to the beer-making process. It covers wholegrain brewing or brewing with a malt extract.

This post is part of a series of posts on the beer-making process. See Homebrewing 101 for detailed information on the equipment, ingredients, sanitation, and recipes.

Here are the 7 simple steps in the beer-making process.

Skip this step if you are only using malt extract, as you can just add the malt extract directly to the boiling pot and continue from that point.

However, wholegrain beer has a wonderful flavor, so I really do recommend taking the time to make your own wort. Alternatively, you can also do a combination of whole grain and malt extract, which is generally cheaper, but still has the wonderful flavor of an all-grain beer.

There are 2 steps involved with preparing the wort.

The goal of heating the mash is to keep the malted grain submerged in water at around 150F /67C (depending on the recipe) for 60 minutes.  This activates the enzymes in the grains so that they convert the complex storage starches into simple sugars to feed the yeasts.

Sparging is the process of completely rinsing the malted grain to get out all of the wort.

After the mash has rested for 60 minutes, it’s time to drain the wort. Open the valve at the bottom of the mash tun, and drain all the wort into your boiling pot. (This assumes that your mash tun has a filter. If not, then you will have to follow a complicated process to get the grains to settle out. You can find instructions for Lautering here. Though really… I recommend just making sure you have a filter.)

Heat the sparging water to 170F / 77C (the amount of water will depend on your recipe and how much water you’ve already used). Then pour the hot water through the mash tun, and continue draining the wort into the boiling pot.

Bring the wort to a boil. Typically the wort boils for about 90 minutes.

Hops and Irish moss are added to the boil as indicated by the recipe.

Chilling the wort is probably the trickiest part of brewing beer.

Once the wort has finished boiling, it needs to be chilled to around 70F / 21 C before adding the yeast. Don’t be tempted to add the yeast earlier or you may end up killing it!

It is also important to chill the wort relatively quickly (it takes me several hours) to prevent wild yeasts and bacteria from colonizing your beer and turning into something funky.

Here are three ways to chill the wort:

Once the wort has cooled, remove some wort to calculate your original gravity with a hydrometer (only required if you want to know the final ABV).

To pitch the yeast, start by sterilizing the yeast package, the mixing spoon, and EVERYTHING that touches the beer after this point. (I recommend doing it throughout the brewing process, but it’s more vital after boiling.)

Then add the yeast to the chilled wort. Stir vigorously. The goal is to mix some oxygen into the wort for the yeast.

Using an auto-siphon, move the beer from the boiling pot into carboys. Leave lots of headroom in your carboys, because the beer will bubble significantly during the fermentation process.

Cap the carboys with airlocks and store them somewhere dark and relatively cool (67F / 19C) for around 10-14 days.

The exact temperature range and length of time will depend on the strain of yeast, so follow the information on your package.

If the recipe calls for dry hopping, then you will need to add hops to the beer after the primary fermentation has finished. This final addition of hops is for flavor and to act as a preservative. It will result in a deliciously hoppy beer.

To dry hop, rack the beer into a clean carboy. Add in the hops and cap it with an airlock.  Allow it to sit for another week or two for the hops to dissolve and fall to the bottom.

The beer is fully finished after 2-4 weeks in the carboy. At that point, all of the sugars will be consumed by the yeast.

However, the beer will be flat. To carbonate the beer, extra sugar is added before bottling. This will give the remaining yeasts something to eat, and carbonate the bottles of beer.

I recommend racking the beer back into a STERILE boiling pot, leaving behind any remaining sludge in the bottom of the carboys. Then mix dextrose into the whole batch of beer, before bottling. This ensures that the dextrose is evenly mixed in.

The final specific gravity reading is taken at this point to calculate the ABV.

Beer will build up carbonation, so it needs to be bottled in plastic bottles, swing-top bottles, or capped beer bottles that are designed to handle the carbonation.

If you are doing a large batch of glass bottles, do at least one plastic bottle so that you can test the carbonation by seeing how firm the bottle becomes.

Using the auto-siphon, bottle the beer, leaving about 1.5-inches (3 cm) of headroom at the top.  Cap your beer and store it in a cool, dark location for another 2-4 weeks. The beer is ready when it tastes good!

I recommend drinking homebrew in 3-4 months. The beer is shelf-stable. However, it’s also preservative-free, so don’t leave your precious homebrew to ferment for too long. 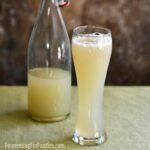 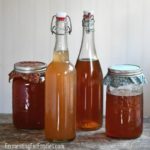 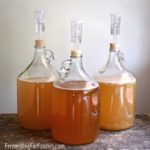 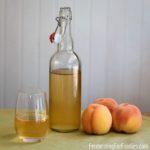 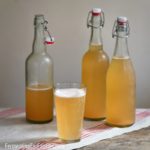 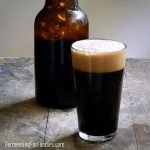